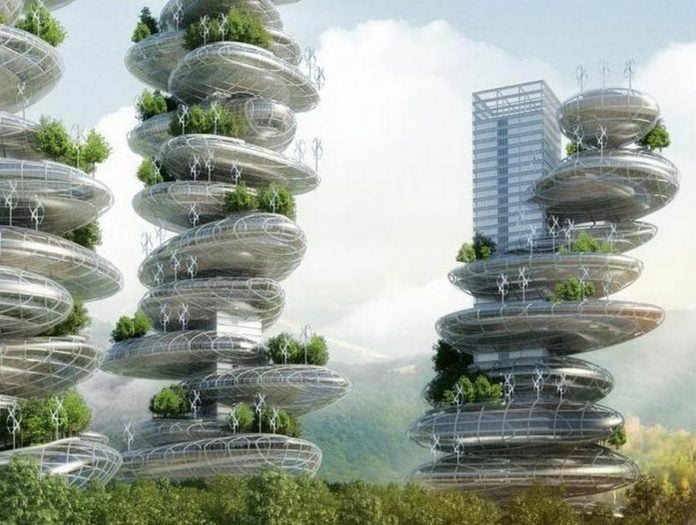 A French architecture firm has designed six high-rise towers that embody the concept of green living, aptly dubbed “Farmscrapers”. The project was planned specifically for the Chinese city of Shenzhen, which is increasing in population density and urban development, leading to many of the environmental and social problems associated with population growth.

The six proposed towers would consist of residential apartments, office spaces and recreational areas. According to the design, there would be gardens suspended on the exterior, and a substantial amount of solar cells would be installed to provide clean energy. Wind turbines would also be used to complement the renewable energy solution. Each tower would stand at 396 meters tall, with a total of 111 floors.

Each level would be shaped like a pebble, and connected to the rest of the structure by a central column. The architects also devised a waste water system, which would recycle grey water. The firm responsible for the project, Vincent Callebaut Architects, said that “It is a prototype to build a green, dense, smart city connected by technology and eco-designed from biotechnologies”.

With transparent exterior walls, certain sections of each building could be turned into a greenhouse for growing food. There would also be various orchards and gardens throughout the tower. Finally, the top of each pebble, or level, would provide space for growing plants or produce. With an increasing world and national population, China faces the challenge of providing sufficient food for its citizenry whilst more and more land is converted from agriculture to urban development.

Related:   A Glimpse into the Future: Key Technologies and Concepts

This is not the first notable environmental design to emerge from Vincent Callebaut Architects. The firm is also responsible for the concept of the Lilypad, otherwise known as a floating ecopolis. The design was specifically targeted at future climate change refugees resulting from rising water levels. The Lilypad was designed to be completely self-sustainable, with the ability to shelter 50 000 people. The proposed floating city featured a central lagoon that was tasked with purifying the water, and three mountains to create landscape diversity. The outer shell of the structure would be coated with titanium dioxide, which would react with the sun’s UV rays and absorb atmospheric pollution. Renewable energy would be provided via solar, thermal, wind, tidal and biomass methods.

Whilst there are no plans to actually go ahead with the construction of these two incredible ideas, it is essential that we continue to think up innovative solutions to combat climate change. Farmscrapers and floating cities are simply the tip of the (melting) iceberg.