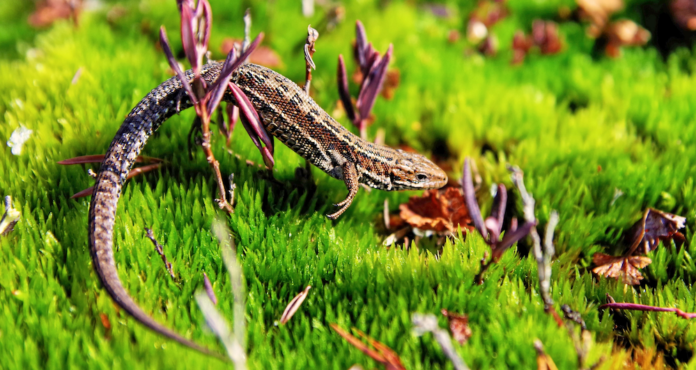 Of the many different challenges our environment faces in the modern world, the increasing prevalence of invasive species is being talked about more every day.

Invasive species are defined as organisms that have arrived in an environment they aren’t native to and thrive regardless, upsetting the delicate balance of their new home in the process. This can be very destructive to local ecosystems, often resulting in the reduction or even extinction of numerous native species populations.

While it is true that some level of invasiveness is natural – after all, how else would species spread? – it’s also no coincidence that the number and impact of invasive species has exploded in the past couple centuries.

We humans have managed to build an extremely interconnected world, where travel and trade all around the globe is occurring everyday.

Unfortunately, that has also made it extremely easy for some species to hitch a ride and spread far beyond their native ranges, and wreak havoc on the unprepared ecosystems they end up in.

Some of the most famous examples include the cane toads in Australia, the reticulated pythons in the Everglades, and the zebra mussels, well… everywhere.

However, these are examples of very blatant and well-known invaders. It’s important to know that just because an invasive species isn’t obvious doesn’t mean it isn’t just as destructive. In fact, many of most inconspicuous species are also the most successful – helped along by the much smaller spotlight put on them.

This includes several species of reptiles, who have invaded some parts of the U.S.A. so thoroughly that most people assume they’re native! And because of that, relatively little is being done to control their populations – leaving them free to damage native ecosystems.

This article hopes to shed some light on these invasive herps – because who knows, you may be walking past some every day without realizing it! 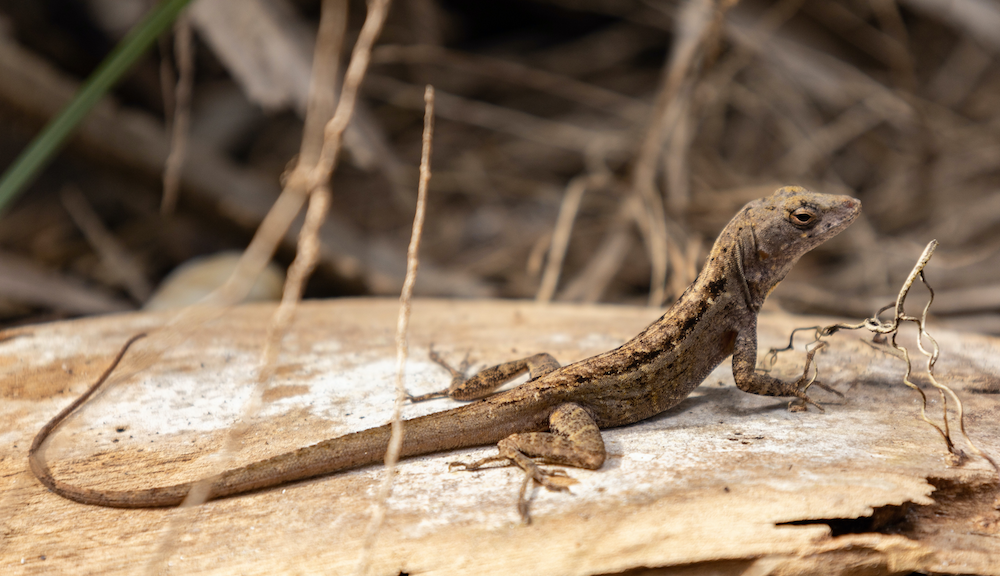 If you’ve ever lived in, or even just visited, the southeastern United States, then you’ve probably seen an anole before. Long-tailed, narrow-bodied, and with almost cone-shaped heads, these small arboreal lizards are practically everywhere you look, scurrying up trees and along buildings frequently.

The green anole is indigenous and widespread across the southeast and makes up vital parts of many food webs. However, their numbers have been declining greatly in recent years -and much of it is thanks to these guys.

Brown anoles – identifiable by their exclusively brown and gray colorations – are native to the Caribbean, especially on islands like Cuba and the Bahamas, but were introduced to North America over a century ago likely by human ships.

Since then their numbers have exploded and spread out to cover much of the southern U.S., displacing many native lizard populations.

As they are larger and more adaptable, brown anoles tend to outcompete their green anole cousins in every environment they share – not helped by their penchant for eating other anole’s eggs nor the variety of non-native diseases and parasites they brought with them – which has drastically affected indigenous populations and may lead to serious consequences in the future.

Geckos are pretty easy to distinguish in most cases: bulbous toes, large unblinking eyes (they’re well known for the lack of eyelids!), and even larger triangle-shaped heads.

House geckos like these are actually one of the most widespread and invasive species of lizards in the world, being found far beyond their native ranges – all the way from Florida to California.

This is helped in large part by their broad diets, rapid reproduction, and popularity within the pet trade – like many popular pet reptiles, geckos are often released into the wild by owners who no longer want them.

This makes them an environmental concern, as they often displace indigenous lizard species through sheer numbers and competition for food. 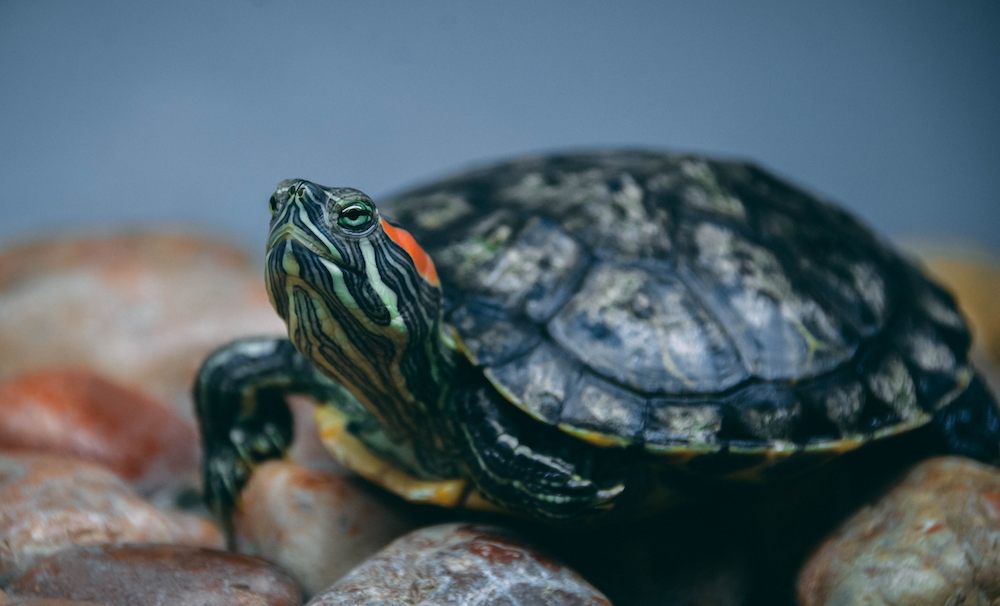 Arguably one of the most invasive reptiles in the world, populations of these turtles can be found on every continent (except Antarctica of course) and in every U.S. state.

Red-Eared Sliders are easily identifiable by their colorful green and yellow striped patterns and named for the bright red spots behind their eyes, the red-eared slider or terrapin is native to the midwestern United States, especially around the Mississippi River and its many tributaries.

However, like the house geckos they have managed to spread far beyond this range thanks to the pet trade.

Their striking appearance and docile temperament has made them the most popular pet turtle in the world. Unfortunately, many owners don’t realize the commitment they come with due to their large adult size and long lifespan, leading many to just dump them in the wild.

Related:
The Importance of Apex Predators for a Healthy Ecosystem

Their exceptionally hardy nature lets them survive and thrive in pretty much every environment, from Texas to New York, and even Hawaii! In fact, they are becoming dangerously overpopulated in many ecosystems, overwhelming indigenous species and causing significant environmental damages.

A less widespread, but even more destructive invasive species to the U.S. is the brown tree snake.

As the name would suggest, these arboreal snakes come in shades of light brown and brownish yellow, often with dark bands running down their especially long and thin body. They have a recognizably big head, and large eyes with cat-like pupils.

Indigenous to Southeast Asian islands like New Guinea, Australia, and Indonesia, this species has since spread across to Pacific to many other islands, such as Saipan and Guam.

They are especially infamous on Guam as upon arrival, without any natural predators and an extremely broad carnivorous diet, they were able to reproduce rapidly and wipe out many native fauna – more than half of the indigenous bird, bat, and lizard species have since gone extinct!

With the loss of these species, many of which were important pollinators of the island, a cascading effect has taken place in Guam’s ecosystems, starting with the reduction of native plant species that relied on these pollinators and leading to the loss and endangerment of many more.

The impact of this fairly inconspicuous reptile on an entire ecosystem is a great example of how damaging invasive species can be, and makes the potential spread of the brown tree snake further to places like Hawaii or even mainland United States a serious concern.

With the lessons learned from the brown tree snake crisis in Guam, we should be on high alert for similarly unique invasive reptiles – such as watersnakes.

While watersnakes can be found in many places throughout the world, there are 2 specific species that have become infamously invasive.

The common and banded watersnakes are recognizable by the spotted or banded patterns running down their thick and fairly heavy bodies in a variety of browns, grays, and red colors. They have relatively small and triangular heads, and their appearance often results in them being mistaken for cottonmouth/water moccasins instead.

Both of these species are native to the east coast of the United States’, but in recent years populations have begun to be found on the western as well, specifically in California.

This is a serious concern, as like the arboreal-specialized brown tree snakes in Guam, California has no native watersnakes other than garter snakes – meaning the more aquatic-specialized watersnakes are able to significantly outcompete indigenous species and damage local ecosystems.

Already these snakes are becoming a common site in Californian wetlands, and many native species populations are on the decline as well.

As our world becomes increasingly interconnected, it becomes easier for some species to spread far outside their native ranges and become invasive.

Invasive species are an increasingly serious threat to the natural world. They often reproduce quickly in new environments and lack natural predators, allowing them to outnumber and outcompete indigenous species.

This can quickly upset the delicate balance of many ecosystems, leading to the loss of important species and destruction of the environment.

Unfortunately, it’s often incredibly difficult to determine where and how many of an invasive species there are. To combat this, it is important everyday people like us do our part and notify the proper authorities if we see one – something admittedly much easier said than done.

Some of the most invasive and damaging species are also the most inconspicuous, and in many cases are easily mistaken for something native. Examples of this are:

Native to the Caribbean, these lizards have since spread throughout much of the southern United States, and have outcompeted and greatly reduced the populations of native lizard species like the Green Anole

Several of this recognizable lizard species originating from the Old World have made their way to the Americas, and spread throughout the southern U.S. thanks in large part to the pet trade.

One of the most invasive reptiles in the world, their popularity as pets (and irresponsible dis-ownership) has allowed these Midwest-native turtles’ to invade every continent on the planet in dangerously large numbers.

An infamous example of how dangerous invasive species can be, these Southeast Asia-natives are known for wiping out most of the bird, bat, and lizard species indigenous to Guam – the loss of pollinators then resulting in a ‘domino-effect’ that severely reduced the flora species and plant coverage on the island.

Native to the eastern U.S., both the common and banded watersnakes have been found throughout various Californian wetlands, alongside noticeably reduced native species populations in an eerie similarity to the Brown tree snakes in Guam.