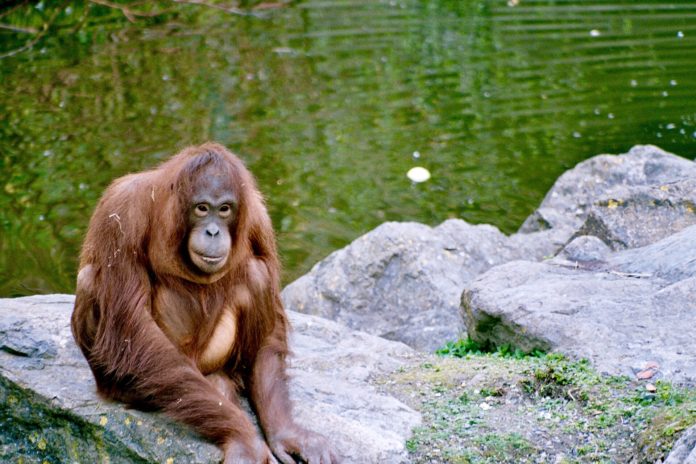 Upwards of 150,000 Borneo orangutans – almost half the global population – were killed over a 16-year period due to human conflict and deforestation of their habitats.

And the bad news doesn’t end there as a study suggests that at this rate, another 45,000 orangutans will be wiped out within the next 35 years.

The startling, and worrying statistics have been drawn from an exhaustive study of data from 38 research organisations.

With many lost to habitat loss, previously underestimated numbers of the population were intentionally killed or hunted in forested areas.

The conclusions were revealed by the study’s lead co-author Maria Voigt, from the Max Planck Institute for Evolutionary Anthropology and the German Center for Integrative Biodiversity Research.

Scientists said the numbers focused on a period between 1999 and 2015.

The losses are blamed on deforestation, such as logging, the drive for palm oil and mining.

The study, conducted jointly with Professor Serge Wich, of Liverpool John Moores University, UK, first had to draw estimates and how packed orangutan populations were in Borneo. They concluded there were 36,555 over the 16-year period.

They then condensed all the information further and found nearly half of the orangutans disappeared – with large numbers from untouched habitats.

“We put one and one together,” said Voigt, who claimed animals are being slaughtered by hunters or due to crop-raiding.

“We didn’t expect the losses to be so large in standing forest,” Prof Wich told BBC News.

“When these animals come into conflict with people on the edge of a plantation, they are always on the losing end. People will kill them.”

And the killings haven’t stopped. A recent report said an orangutan that was shot at had 130 pellets recovered from its body.

The study’s research team has now called on Malaysia and Indonesia to do more to stop the deliberate slaughter.

Wich said: “We have to somehow make it not cool to kill an orangutan,” adding that conservation finance that sets aside land or funds reintroduction of captive individuals is needed for information campaigns.

The recovery rate of orangutans is further undermined by the slow rate of their reproduction: they only have a baby every six or seven years.