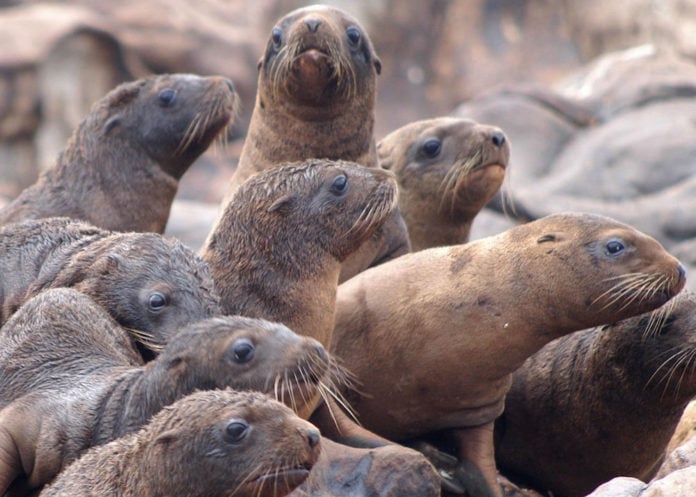 A record 2,250 sea lions have inundated the coast after being prematurely abandoned by their mothers. This number is 20 times the average of the last decade for the first three months of the year, according to Reuters.

Scientists believe that overfishing of sardines, whose numbers are at about 1% of what they were in the 1930s, has forced mother sea lions to venture farther out to sea to look for food. When the mothers don’t return soon enough, the pups must resort to taking to the sea on their own without the proper skills to survive.

About 70% of the sea lion pups born this year are expected to die of starvation, Geoff Shester, the California campaign director of Oceana, wrote in the SacBee.

Warmer water due to global warming is also to blame for the scarcity of forage fish.

Smithsonian Magazine featured a few ecologists in an article questioning the logic behind rescuing these sea lion pups and releasing them back into an ecosystem that already failed them.

“Where are those sea lions going to go? Right now, there just isn’t enough food out there,” consulting ecologist in San Francisco Josiah Clark told the magazine. “Clark says starving predators like the sea lions are a clear symptom of serious problems lower down on the food chain. In this case, climate change may be disrupting essential weather patterns – and bottle-feeding baby sea lions is not helping,” the magazine reported.

Pelagic Shark Research Foundation Sean Van Sommeran suggested in the same article that “a better use of time would be to simply pick up trash – especially plastic – off the beach, and let nature have its way with sea lion pups.”

It’s hard to image feeling good about our overfed selves as we step over thousands of starving babies to gather plastic we put there in the first place.

Then there is the irony of the Pacific States Marine Fisheries Commission, which is charged with protecting ailing salmon runs on the Columbia River in Oregon, where adult California sea lions have flocked en masse to get a share of the populous smelt.

Biologists working to protect the salmon, which are expected to be next on the menu for the sea lions once the smelt season dissipates, must also manage sport and commercial fishermen, who for some inexplicable reason are still allowed a take of the endangered salmon.

Most concerning for humans with an interest in taking more salmon are the sea lions who make their way up the river to forage at the base of the Bonneville Dam, where salmon congregate before making their trek up the fish ladders.

Since 2008, NOAA Fisheries has granted Washington and Oregon permission to kill 55 of the sea lions attempting to survive on fish that has kept them persisting for millennia.

“This year, NOAA will continue to help pay for lethal removals of sea lions below Bonneville, even as the agency funds the rescue of sea lions dying on California beaches,” according to the Seattle Times.

Sea lions are now estimated to be at about the same population they were before humans crossed the land bridge into North America and began hunting them. Their numbers slowly waned until Europeans with their guns almost wiped them off the face of the planet for meat and pelts.

Defended from wholesale slaughter by the passing of the Marine Mammal Protection Act in 1972, their numbers increased to the size nature originally intended for the ecological niche they inhabit.

The success of the sea lion is a testament to how all a species needs to recover is for us to stop killing it. It stands to reason that we might as well try that with the fish in the ocean before it’s all gone for good.

Let the sea lions have their fill. They recovered successfully without us shooting the orcas that fed on them.

Of course, pollution and climate change play their part as well. But just stopping to take and eat fish is much simpler than addressing the intricacies of climate change.

We’re eating the ocean – the life of this planet – to death. It’s important we don’t forget that we’re part of this world. The sea lions are first on the list to suffer, and if things continue as they are, the first to go after the fish. But we can’t remove ourselves from that list.

This weekend my kids and I visited our local Marine Mammal Rescue Center, as we often do. Countless volunteers sweated in the hot Southern California sun, giving up their Saturday to offer these tiny victims of our excess a small chance at life.

Although I consider it an important responsibility to educate my kids on the harm humans are causing to life on this planet through our gluttonous ignorance, it’s also vital they witness the beauty in our own species, and give them a reason to be proud of being human.