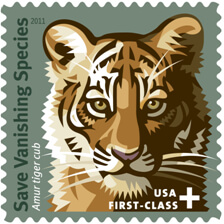 The next letter you send could help save an endangered species from extinction.

This week, the United States Postal Service announced a new semipostal stamp called Save Vanishing Species, the proceeds of which will be donated to the U.S. Fish and Wildlife Service to support the Multinational Species Conservation Funds.

The beautiful drawing of an Amur tiger cub on the stamp was created by Derry Noyes and Nancy Stahl, and represents just one of the animals that will benefit from the purchase of these stamps.

Click here to order the stamps from the US Postal Service’s online store for only $11.

Who the stamps support

The Multinational Species Conservation Funds include the following funds:

Through these 5 funds, the money raised from the stamps flows to the following list of organizations: (click any of the names to be directed to their websites)

Correction: money does not flow directly to these organizations. However, they are members of the The Multinational Species Coalition who are assisting in raising awareness about the new semipostal stamp.

Be sure to buy the Save Vanishing Species stamps and in doing so donate money to great organizations.

A semipostal stamp is also known as a charity stamp – one that is sold at a higher price than normal postage rates, but which donates its proceeds to a charitable cause. Similar stamp series released by the US Postal Service in the past include Breast Cancer Research, Heroes of 2011, and Stop Family Violence.