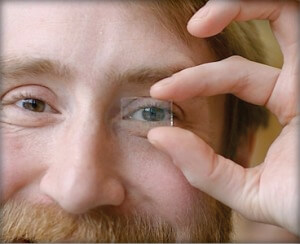 A new solar technology could turn the windows used in everything from skyscrapers to your own bedroom into solar power sources. The transparent solar cell being held by researcher Richard Lunt to the left is a brand new type of solar power technology that can be placed on, or in-between window panes, to generate energy without limiting the amount of light that shines through it.

Although there have been similar solutions to generating solar power using windows before, this is a breakthrough in creating a truly transparent solar cell.

One of the ways the new technology could be used, says Lunt, is in decking out all of the windows in a skyscraper, and essentially turning it into a giant solar energy generating tower. The amount of energy that a typical office building could generate would not completely offset the energy consumption of the building itself, but if they were implemented on the panes of glass in a structure like a greenhouse, they could pour enough clean power into the grid to make it a financially – and environmentally – beneficial decision for a wide variety of people.

Limitations holding the solar technology back

Another issue the researchers have acknowledged with the new solar power technology is the lifespan of the cells. If, for instance, the cells were embedded in-between sheets of glass for standard window panes, you would want the solar cell to continue to generate energy the same amount of time that the window is in the building. Unfortunately, even if the solar cells were given a lifespan of 20 years, they would still not come close to the average life span of a window. While 20 years of generating clean solar power is still a great achievement, potential buyers may hesitate at the seemingly shorter lifespan compared to their windows.