Despite the fact that we like to think we are more in touch with nature, and therefore more environmentally friendly, a new report shows that Canadians use their toilets to throw away things like food, hair, and bugs, wasting on average 6 to 20 litres of water with every flush.

As previously mentioned, flushing can waste from 6 to 20 litres of water on average, and although there are toilets available which dramatically reduce the amount of water consumed every time you flush, not many households have instituted this technology. It is most likely the same people using traditional toilets who make up the 72% of Canadians who admit to unnecessarily flushing items like hair, food, bugs, and cigarette butts instead of throwing them in the garbage.

The worst part about the shocking information is the report shows 80% of Canadians are aware the water in the toilet is no different from the water from the kitchen taps. We may not think of it this way when we flush, but the water that is pumped into your toilet after every flush is still good, clean water that would be good enough to drink (were it in another container).

Even more shocking than the number of people who flush garbage down the toilet is the amount of water the average Canadian uses in a day: 329 liters! With water habits that add up this quickly, it is no wonder we treat flushing garbage down the toilet so casually. Unfortunately, this doesn’t seem to be a practice that we are growing out of, either. People in the age range of 18-35 are the ones who have been flushing more of the garbage.

How we can fix this water wasting problem

The simplest answer is, stop flushing garbage down the toilet! But the real problem goes deeper than that. The survey shows practices like leaving the water running while you are doing dishes, or hosing down the driveway, contribute the amount of water wasted every day in Canada. As soon as we start to realize that everyday water waste is going to have an impact on ourselves and the planet, the sooner we will start behaving differently and conserving one of our most precious resources.

Do you have a unique way you have been saving water around the house? Let us know in the replies, and inspire the rest of our readers to follow suit. 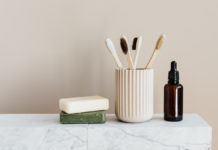 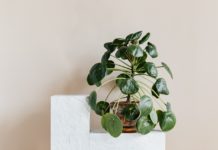 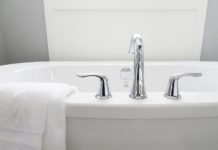 How to Eliminate Bathroom Mildew and Soap Scum without Toxic Cleaners