Today, urban sprawl from major cities has overwhelmed nearby communities and wilderness areas.

Many cities started life as agricultural centers, and in the course of their growth they have over-grown the farmland they were created to serve. Cities are still growing, though the rate is starting to fall off.

It is hard to define what urban sprawl actually is.

Many of the definitions use loaded language to carry through an agenda, and the term itself is often used interchangeably with several other terms.

It is closely identified with low-density land use, in locations distant from the city core, however, and that’s the definition we will use for the purposes of this article.

Low-density land use is typically seen as 4 or less units per net acre.

There are many negatives associated with urban sprawl, and the coverage of prime agricultural areas is just one of them. Loss of wildlife habitat is another, especially of wetlands that are easily filled in to provide more flat land, but also of forests, parklands and open plains.

Cities will devour them all with impunity, driven by a perceived need for more space.

Besides the effect on land, other environmental effects come from the pollution associated with increased car use, increased runoff due to the quantity of land under pavement, and the loss of habitat and a local decline in biodiversity.

Along with the adverse environmental effects, a number of social ills have been laid at the feet of urban sprawl, including loss of community spirit and values, higher costs of providing infrastructure, higher taxes, and a number of other concerns, but they are outside of the scope of this article.

However, urban sprawl, sometimes called suburban sprawl, is a complex subject. It exists for a reason, driven by market forces.

The American Dream includes a vision of home ownership, a backyard, nearby schools, and perhaps a white picket fence. The constant spread of cities facilitates this, making additional land available for a growing population.

Ownership of a detached home is really only affordable for the majority of people in a situation of sprawl. Without the added real estate, prices for single detached homes would likely be out of reach for all but the most wealthy.

Some claim that people like sprawl, or at least the opportunities provided by sprawl. Home ownership, better schools, quiet, privacy, are all cited as reasons to support sprawl, as is the slower pace of life as compared to the city core.

Sprawl has to be examined from both sides. It provides opportunities for affordable housing, but it also has impacts that have to be weighed against the need, and desire, for housing.

Any long-term solution to sprawl has to look at first re-educating people, and perhaps a change to meaning of the American Dream. 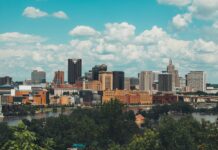 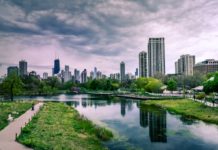