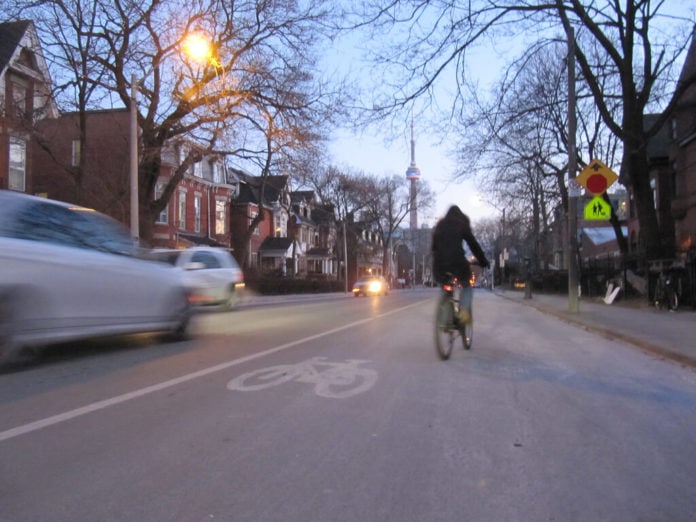 “Helmets save lives,” said lead researcher Dr. Nav Persaud, a family physician and researcher at St. Michael’s Hospital in Toronto, to Globe and Mail. “There are about 70 cycling deaths in Canada every year,” Persaud said. “And based on our study, we estimate we could prevent about 20 of them with helmets.”

Emily Badger at the Atlantic Cities, who reviews the study in Route Infrastructure and the Risk of Injuries to Bicyclists: A Case-Crossover Study, proclaims:

The research will provide weighty evidence for advocates of dedicated bike infrastructure precisely because transportation engineers have long believed the exact opposite to be true. For years, they’ve counter-intuitively argued that you’re actually better off learning to ride alongside cars than having your own bike lane.

And if you think bike lanes are not built because bikers prefer to ride on main roads, then consider the findings of study author Key Teschke, whose earlier research on rider preferences reveals that bikers do prefer designated lanes. She claims:

We were told in advance that young males and people who are experienced riders would tell you they’d rather ride on major streets without bike infrastructure. It turned out not to be true. Everyone had the same order or preferences.

To rehash the environmental benefits, biking is simply better for the environment than driving a car. Vehicles contribute the most to air pollution and vehicle exhaust contributes around 60 percent of all carbon monoxide emissions (and can contribute up to 95 percent in cities.) Cars also secrete toxic emissions including hydrocarbons, carbon monoxide and oxides of nitrogen. According to a study in Great Britain, air pollution from exhaust fumes kill more than twice as many people as road accidents.

Related:   BIXI Toronto: A huge success in only 1 month

If that weren’t bad enough, according to the Environmental Defense Fund, 20 percent of greenhouse gas emissions (responsible for climate change which, in turn, result in artic sea ice loss, problems in vegetation, sea level change and animal extinction) in the United States come from vehicles. Cars require gas, and estimates attribute 77 percent of a car’s footprint to the CO2 released from burning gasoline. But if environmental reasons aren’t enough, then consider the health and financial advantages of biking.