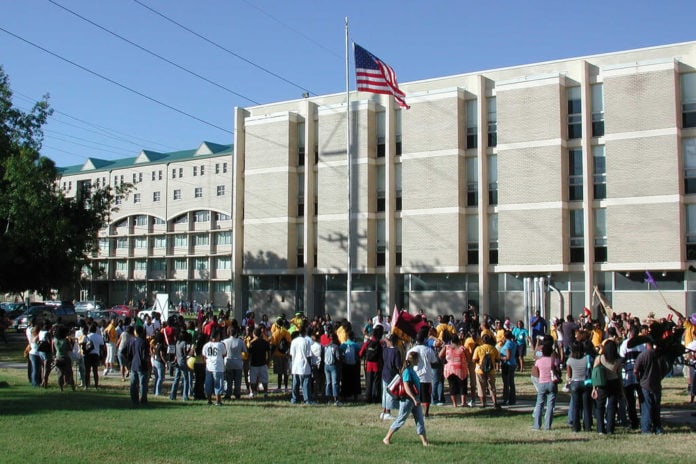 American schools are in bad shape. Many buildings are falling apart, the air and water quality is disappointing, and decades-old heating and cooling systems are inefficient.

It’s a daily reality for some 14 million students, yet the extent of the problem is poorly understood. Nonprofits like the Center for Green Schools (CGS) are challenging complacency on the issue, saying that rotting schools present a major threat to American public education whose knock-on effects are only likely to accumulate without intervention.

That’s the premise of the 2013 ‘State of Our Schools’ report, released by the group earlier this year to draw attention to the slowly escalating crisis of public education.

State of Our Schools

The greening of schools is not only an environmental issue, but also a matter of public health and sanitation. While some schools stand out as bright sources of inspiration for the green education movement, the majority of U.S. public schools are not only energy-inefficient, but often environmentally hazardous and frankly unsafe.

The State of Our Schools report explains that many facilities pose serious threats to the health and safety of children and educators. Common problems include mold, water damage, broken windows, leaking roofs, HVAC inefficiencies, exposed wiring, and obsolete lighting. These are the kind of deteriorated conditions green reformers hope to wipe out of American schools.

The U.S. Department of Education says 43 percent of the schools confirm the presence of dilapidated conditions that actively increase illness, depress academic performance, and interfere with daily learning. These are overwhelmingly the concerns of schools in lower-income areas, where crucial modernization funds are routinely lacking.

Related:   An Environmental Education with a 5-star location

“What we see time and again is there is a major discrepancy in funds and resources that flow to the communities that need it the most,” says Rachel Gutter, director of the CGS. Gutter has previously described some schools’ condition “deplorable” and “unfit for humans to be inside.”

For a growing number of students, faculty, families and local communities, a sustainable public education system is something worth fighting for. For many state legislators and school districts, going green appeals as a way of realizing huge cost savings while taking a media-friendly stand in support of safe and healthy learning environments for the nation’s children.

Paul Rowland, the executive director at AASE, says some schools mistakenly believe that going green is not cost-effective. The mistake comes from a short-term focus on the upfront price of many energy initiatives. Clean energy projects such as solar power generation often require steep capital investments, and public schools from K-12 to higher education everywhere are strapped for cash.

But stagnant infrastructure is expensive. While the upfront costs of energy innovation can be steep, the price of substandard facilities could be even more precipitous. Old infrastructure and obsolete lighting and HVAC systems keep energy costs high through inefficiency, and the problem is worse in low-income districts.

One of the most costly components of K-12 education is the heating, cooling, and electrifying of buildings. According to the Center for Green Schools, K-12 school energy costs total $8 billion a year, but the group says widespread energy improvements could easily slash that figure by $2 billion.

“There is a misconception that ‘greening’ costs more money. Much of that misconception is based on the initial costs and not long-term or life-cycle costs,” Rowland said.

The ‘greening’ of American schools has been slow over the last decade. There are exceptions, however. Many colleges in California, for instance, enjoy the support of the state amid an overall move to a greener economy.

Additionally, fossil fuel divestment campaigns are active at some 300 schools, according to the Sierra Club. About a third of the nation’s 60+ on-campus coal plants are scheduled for retirement following pressure by community groups.

Several colleges in Oregon have received national recognition for their innovative green efforts on campus. Oregon State University (OSU), for instance, was recently named a “green power” leader by the EPA for sourcing nearly 75 percent of its energy from renewable sources.

“It’s amazing that we’ve cut so much of our greenhouse gases so quickly,” exclaimed the coordinator of OSU’s Office of Sustainability. “The next few years will include more conservation, more solar.”