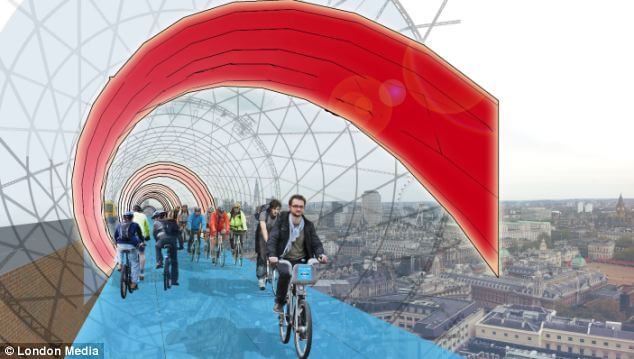 If you’re like me and own a bike, but are terrified to ride it on city streets, this may interest you. A unique idea is currently being tossed around by a landscape architect in London.

According to the Daily Mail, Sam Martin gave up cycling in London because he found it too dangerous. So now, he’s reportedly proposing Skycycle. It is a separated, elevated system of bike lanes for the city.

A recent blog post on Treehugger.com dissects the feasibility of the Skycycle idea. Blogger Lloyd Alter says Skycycle is the next logical step because you can’t realistically build more cycle lanes on ground level. As he pragmatically puts it: You’d have to start knocking down buildings and there will always be the problem of traffic. It will be less safe than it is now and you can’t persuade people to get on bikes as it is even if you keep raising taxes on cars.

Alter points out a comment by Sarah Laskow at Grist: “This could be a big win for bikers, graffiti artists, and people who like to pee on the side of the road.” But Alter says Skycycle shouldn’t be dismissed so lightly: “Not because there is no more room for bike lanes in London, but because these kinds of bike lanes serve a totally different purpose.” 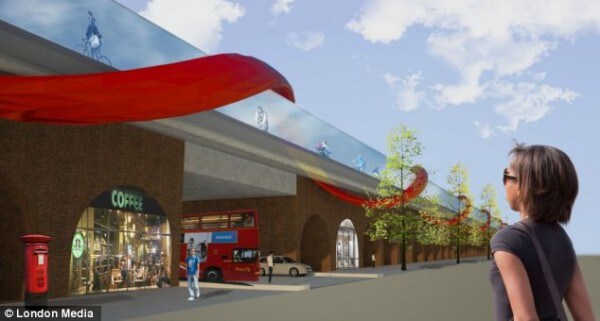 The blog post also notes a proposal for Velo-City, created by Chris Hardwicke. Chris noted that enclosing the cyclists in tubes created a “dynamic air circulation loop that creates a natural tail-wind for cyclists. The reduction in air resistance increases the efficiency of cycling by about 90%, allowing for speeds up to 40 km/hr.”

The Velo-City circulation system reportedly acts much like a controlled access highway system for bikes, moving cyclists at high speed from neighbourhood to neighbourhood, at which point you transfer to the local bike lane or road grid. Alter believes that because it is so efficient, it lets cyclists travel longer distances in less time. He believes that, much like a highway system, it would increase the number of bikes on the local roads, not decrease them.