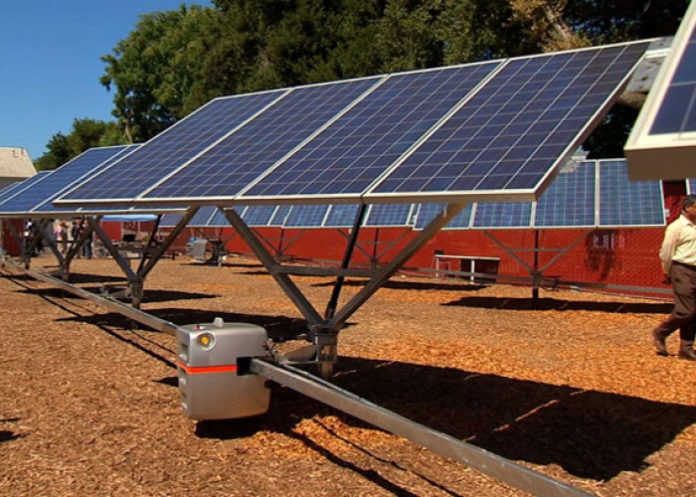 Industrial solar energy may seem like a great concept in theory. But the costs of set-up and operation have many companies shying away from the technology.

However, there’s a new company that is helping to reduce operating costs by bringing the power of robotics to the solar industry.

Today, California-based QBotix unveiled the QBotix Tracking System (QTS). The system uses rugged, intelligent and mobile robots to operate solar power plants and maximize energy output. The company says QTS increases the energy production of ground-mounted solar power plants by up to 40 percent over existing fixed mount systems. It also lowers the Levelized Cost of Electricity (LCOE) by up to 20 percent. In addition, QTS reportedly offers fast installation, has low operations and maintenance costs, and is compatible with all solar panels and mounting foundations.

Solar tracking systems increase energy production by aiming solar modules toward the sun and tracking the sun as its relative position moves during the course of the day. Conventional tracking systems are often said to be expensive, unreliable, and complex to install and maintain. They are typically large structures requiring thousands of pounds of steel and concrete.

QTS says it has re-invented the design of all solar tracking systems. QTS uses a pair of autonomous robots, one primary and one back-up. They’re designed to control 300 kW of solar panels with mind-numbing accuracy. The robots travel on a track and adjust each mounting system to optimally face the sun in succession. Ultimately, each robot replaces hundreds of individual motors and controllers found on conventional tracking systems.

“Robots have proven themselves in extreme and diverse environments from the surface of Mars to battlefields and ocean depths. We’re now deploying the innovations developed in robotics over the last several decades to manage solar power plants,” said Wasiq Bokhari, CEO and founder of QBotix. “Regardless of the choice of solar panels, inverters, foundations or other system components, the use of QTS will dramatically lower LCOE compared to all existing mounting or tracking systems.”

QTS is now available for the commercial market.