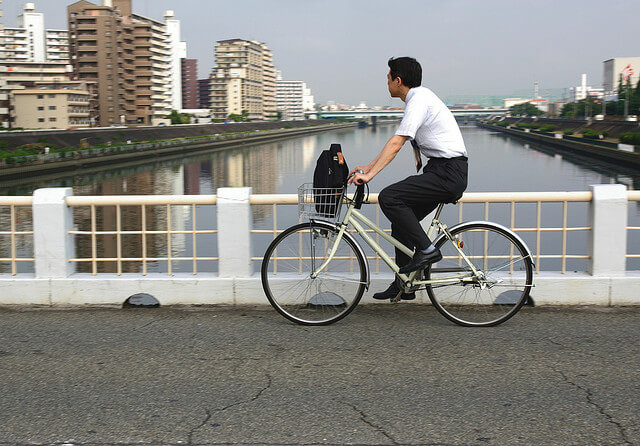 In today’s world, we view cars as a basic necessity, not a luxury.  Many of us grew up with the misconception that once we became adults, we were supposed to have the following: a college degree, a spouse, children, a house, and a car.  Because of that, we automatically save up money and run to the nearest car dealership without even considering the alternative forms of transportation readily available to us.

America is chock full of rail systems, bus routes, bicycle lanes, and trails.  We just need to get off the road and look around.  Chances are your town has some sort of local public transportation.  If it doesn’t, don’t pick up your car keys just yet!  Almost half of all journeys taken in the United States are one mile or less.  Next time you need to grab something at the grocery store, why don’t you bust out your bicycle and go out for a nice bike ride?

If you’re like most people, you must be saying, “Why can’t I just drive?  It’s much easier.”

Driving may be easier for you, yes, but it’s not easier on your wallet, your waistline, and the environment.

Cycling and the environment

Not only is riding a bicycle much cheaper than driving a car or having a gym membership, it’s also very kind to Mother Earth.  It’s quite simple.  You’re not polluting the air, taking up room on the road, or using up one of the world’s most precious natural resources: oil.  Did you know that a bike could travel 960 miles before producing as much energy as a gallon of gas in a car?

One of the most common reasons people opt out of commuting by bicycle is that it’s too time-consuming.  In this hectic world, we can hardly blame them for choosing to drive instead of riding a bicycle.  However, what most people don’t realize is that riding a bicycle doesn’t take up that much time!  The average bicycle speed is 15 miles per hour, and competitive cyclists can top out at a steady speed of more than 30 miles per hour.

If you decide to stop riding your bicycle along the way, due to feeling too tired or getting caught in unexpected bad weather, that’s okay!  Most, if not all, public buses have bike racks and many rail systems allow bicycles.  All you’ll have to do is to find the nearest bus or train stop, hop aboard with your bike, and complete your journey.  Public transportation is a beautiful thing.  It’s cheap, environmentally friendly, and relieves you of any worries about owning a car.

There are many integrated transportation options everywhere.  If you explore all the different modes of transportation in your area, you can come up with a customized integrated transportation system that suits you the best.  For example, I live in Colorado, way up in the mountains.  There’s a bus stop right outside of my house, which is about a thousand feet higher than downtown.  Every time I need to go downtown, I zoom down the mountain on my trusty bicycle, and when I need to go home, I simply put my bike on a bus bike rack and take the bus up the mountain.  With that kind of arrangement, who needs a gas-guzzling car?

The benefits of being car-free

By ditching your car and utilizing your legs, bicycle, and public transportation as much as possible, you’ll be likely to find yourself smiling more often.

No car payments.  No car insurance.  No having to pump gas.  No driving around the block 20 times until a parking space opens up.  No polluting the environment.  You’ll be free, more fit, and a little bit richer.

Now, get off the road and look around for what your town has to offer.  Mother Earth will thank you!