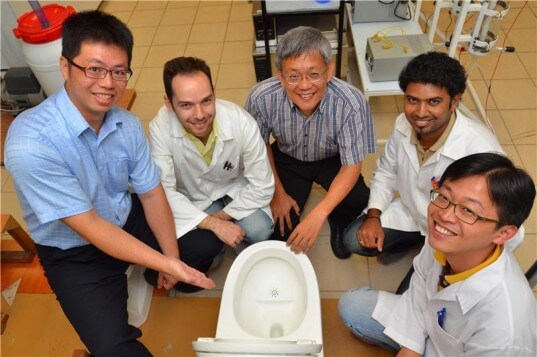 After a year and half of research, scientists from Nanyang Technological University (NTU) have found a way to reduce the amount of water needed for flushing and reuse human waste. Their invention involves a new toilet system (dubbed the No-Mix Vacuum Toilet) that can turn human waste into electricity and fertilizers while reducing the amount of water needed to flush by up to 90 percent – in comparison to the currently used toilet systems in Singapore.

How does this innovative system reduce the amount of water used? By using vacuum suction technology – which is used in airplane lavatories–which would only require 0.2 liters of water to flush liquids and one liter to flush solids. This is a significant reduction from the currently existing conventional toilet which uses 4 to 6 liters of water with each flush. Estimates have speculated that if this system were to be installed in a public restroom, they would save 160,000 liters of water each year per hundred flushes!

Currently the scientists are trying to conduct a trial by installing the prototypes of this toilet in two NTU restrooms, and then to share this technology with the world in the next three years. But as Associate Professor Wang Jing-Yuan, Director of the Residues and Resource Reclamation Centre (R3C) at NTU points out, conserving water is not the only benefit and goal of this system – the goal is to “have a complete recovery of resources so that none will be wasted in resource-scarce Singapore.”

“Having the human waste separated at source and processed on-site would lower costs needed in recovering resources, as treating mixed waste is energy intensive and not cost-effective. With our innovative toilet system, we can use simpler and cheaper methods of harvesting the useful chemicals and even produce fuel and energy from waste.” 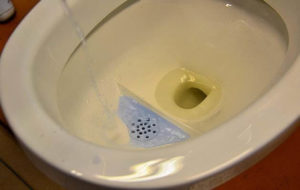 The No-Mix Vacuum Toilet  has two separate chambers that separate the liquid waste and the solid waste. The liquid waste would then get diverted to a processing facility where nitrogen, phospherous and potassium can be recovered and reused for fertilizer. The solid waste would be sent to a bioreactor where it would be digested to release a bio-gas containing methane–methane is odorless and can be used to replace natural gas used in stoves for cooking, and can be converted to electricity.

If this new toilet is functional and lives up to its claims, then this could help save water around the world. Flushing the toilet is one of the top uses of water in a home: It has been estimated that the average toilet can use up to 3.5 to 5 gallons of water per flush. Jack Sim, the founder of the World Toilet Organization, told Time Magazine that “chances are you’re dumping up to 22 liters of drinkable water every day, one three- to six-liter flush at a time.”

But that’s not the only problem. After flushing, a lot of resources are spent to clean flushed water and thereby, increases the carbon footprint of toilets. Rose George, author of The Big Necessity: The Unmentionable World of Human Waste and Why it Matters shares that “the sewage system uses as much energy as what the largest coal fire station in the [country] produces.”