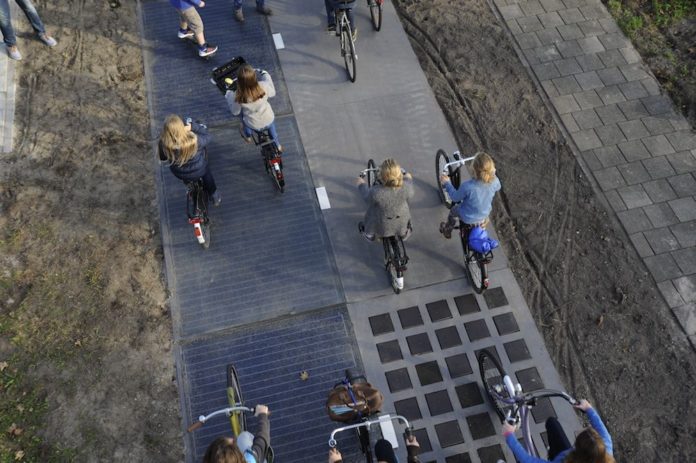 In late 2014, the government of the Netherlands, in collaboration with the private sector, opened a first-of-its-kind bike path that is able to generate electricity through solar power, aiming to use the country’s cycling culture to increase electricity generation from renewable energy sources. Now, six months after the pilot project was launched, the engineers that helped create the world’s first solar road say that it has exceeded even the most optimistic expectations in terms of the amount of energy it has produced.

SolaRoad, which was built in November 2014, in the Dutch town of Krommenie, near Amsterdam, is a 230-foot long bike path that has solar cells embedded in it, covered with a layer of tempered glass, converting sunlight into electricity, which is then sent to the electrical grid and used to power traffic lights, street lighting, or households. Engineers said that the bike path has been very popular among cyclists in the first six months since it was opened, with more than 150,000 riding over it so far.

Representatives of the group that launched the project recently announced that the bicycle path has produced over 3,000 kWh of electricity, which is significantly more than what engineers had predicted, and enough to power a typical one-person household for a year.

“We did not expect a yield as high as this so quickly,” said Sten de Wit, spokesman for SolaRoad, in a written statement. “If we translate this to an annual yield, we expect more than the 70 kWh per square meter per year, which we predicted as an upper limit in the laboratory stage,” he added.

The 230-foot-long stretch cost almost $4 million to build, and by 2016, it is supposed to be about 330 feet, which is when the electricity it will produce will be used for other purposes, in addition to powering streetlights and households. One of the purposes the electricity generated by this road will be used for in the future is recharging electric vehicles, which would be able to extend their range by driving on this road.

However, although the technology has a great potential – since it can help local households become independent from the grid, and it addresses the range anxiety issue, which is a major obstacle for more widespread adoption of electric vehicles – it does have one big downside. Given that the solar panels embedded in the road can not be angled toward the sun, they can’t get as much sunlight and generate as much electricity as standard rooftop solar panels.

The solar bike path in the Netherlands is not the only solar road project in the world. Solar Roadways, a startup company based in Idaho, founded by Scott and Julie Brusaw, started a crowdfunding campaign in April 2014 aimed at raising money that would be used for putting the company’s solar-powered road panels into production. The campaign, which was started on Indiegogo, has raised $2.2 million so far, exceeding its original goal of $1 million, but it hasn’t yet resulted in the installment of a solar road in the United States.