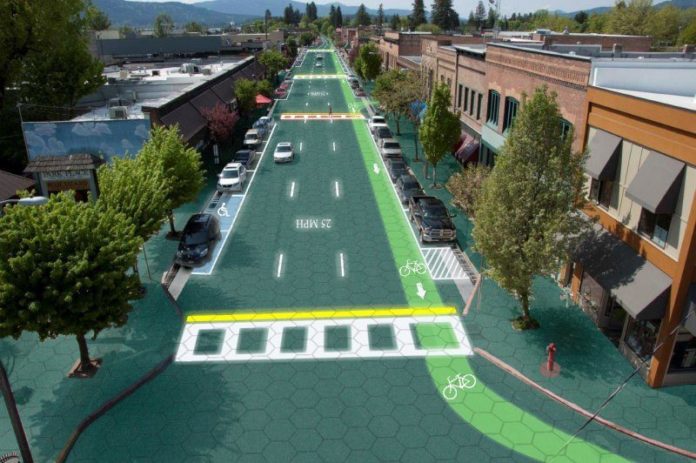 Few people question the value of renewable energy sources, as our world continues on a rampage of consumption and environmental damage. The problem with renewable energy is its viability. Methods such as wind turbines create unique hazards to wildlife, and dams require a large amount of money to create with only a handful of suitable places for them to be built.

Solar energy offers a low-cost solution that can be applied anywhere the sun reaches, but it requires a large amount of area to become viable. This is where the proposal for solar roadways enters in. Solar roadways may be the way to overcome the land area requirement that solar energy needs, but are they truly a viable solution?

The Idea behind Solar Roadways

Solar roadways are much like normal roadways, save for the fact that they have solar panels built into the roads. This gives them a few unique advantages when compared to standard roads.

For example, they are able to translate a large amount of photons into usable electrical energy. They can be constructed from materials that aren’t prone to cracking or creating potholes like current road materials are, and they can have lighted lane markers to help drivers at night.

These types of roads could revolutionize renewable energy, but they still have a few distinct challenges to overcome.

The Challenges of Solar Roadways

While there are a few prototype solar roadways in existence, the largest problem with creating them revolves around the cost. They require both solar cells and materials sturdy enough to withstand thousands of tons of pressure. According to the professionals of T. Luckey Sons Inc.. who specialize in slab lifting in Ohio, the shifting of the ground plays a big role in the possible success of solar roadways. Aside from the pressure underneath the road, the structure will also need to be sturdy enough to withstand thousands of pounds of trucks and cars daily.

These monetary challenges in the initial design phase of solar-powered roads are only the tip of the iceberg. Some critics have even stated that solar roadways seem to maximize the cost of collecting solar energy. The added maintenance costs to repairing cells that have broken due to changes in the ground, cold weather, accidents and wear would cost taxpayers an incredible amount of money. This may make their use unfeasible.

Even some of the proposed solutions to these issues are a bit lackluster.

For example, one solution to preventing frost heaves is to use heated roads. This makes the cost of maintenance even higher and may result in more energy usage than is produced by these roadways. The combination of these costs would place solar roadways as something even more expensive than regular photovoltaic cells, which cost twice as much per kWh than non-renewable sources. This makes them unviable for large-scale applications.

Despite the numerous challenges that may prevent solar roadways from replacing highways and other high-traffic parts of the road, there are still some situations where they may become feasible. Private roadways that feature less traffic than other roads and experience traffic from smaller vehicles make for an ideal situation. Replacing the typical private driveway with solar driveways is another instance where this technology may provide a win-win situation.

Solar Roadways: Pipe Dream or Soon to Be Reality?

The bottom line is that solar roadways are unlikely to see use in highways and other high-traffic areas until advancements in engineering allow for sturdier and more cost-efficient ways to install them. Privately owned solar roadways, such as for alleys and driveways, are a more viable option for the near future.

While these smaller areas will not solve any energy crisis in the near future, they can provide a reliable way to produce renewable energy for a relatively minor investment.