Greener IdealHelping you live sustainably
More
Home News How Bicycles Became the Primary Mode of Transport in the Dutch City... 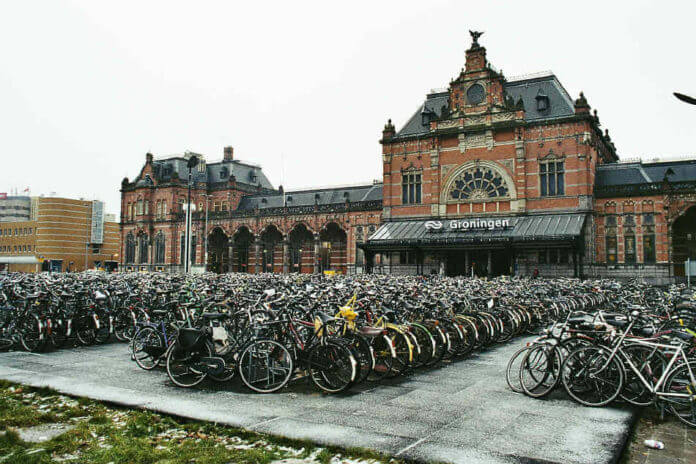 Many cities around the world are trying to promote the use of bicycles in an attempt to reduce traffic congestion and improve air quality, as they are considered by most traffic experts to be the key to urban mobility, but few of them manage to do it as successfully as Groningen.

Groningen is a university city in the north of the Netherlands, and it has become synonymous for bicycles, thanks to the fact that with a population of 190,000, it has 300,000 bicycles, and only 75,000 cars. This Dutch city is often called the cycling capital of the world, and deservedly so, as 61% of all trips in Groningen are made by bicycle, which is considerably more than any other bicycle-friendly city.

Thanks to a series of changes in transport policy and urban planning made a couple of decades ago, the city center virtually became car-free, in order to encourage people to walk and use bicycles more often. In the late 1970s, city authorities divided the center of Groningen into four quadrants, and introduced a ban prohibiting citizens to travel directly from one quadrant to another by car, forcing them to use a ring road, instead. The effect achieved with this measure are much longer travel times for those who want to travel across the city center by car, which naturally deterred many residents from sitting behind the wheel.

While the city discouraged driving cars, it introduced various measures to encourage the use of bicycles and make cycling a more viable and safer option. An extended biking infrastructure was built, with a lot of safe and high-quality bicycle paths in the city center, which made biking the fastest and most practical mode of transportation.

Related:
How Bikes Can Save the Environment [Infographic]

Pedestrians and Cyclists Getting More Space

By excluding cars from the city center and giving more space to pedestrians and cyclists, the local government managed to prevent the potentially huge traffic congestion problems. The city was facing serious traffic congestion issues in the 70s, when the number of cars in Groningen, like in many other cities across Europe, started to increase drastically. But Groningen avoided traffic congestion by creating a safe and comfortable environment for cyclists, and at the same time, reduced air pollution and improved the quality of life for its residents.

While the transportation policy changes introduced back in the 70s helped make Groningen extremely bike-friendly, the city hasn’t stopped working on improving its cycling infrastructure. Back in 2014, authorities installed intelligent traffic lights for cyclists, in order to help cyclists get around town even more easily. In addition to the already existing green wave for cyclists, reducing their travel times further, the city installed sensors at traffic lights to extend green light time for cyclists in case it rains.

Over the next ten years, Groningen plans to roll out a few more measures that should help it remain the world’s most bike-friendly city, but also overcome the challenges that it’s expected to face as the number of bicycle commuters is bound to increase significantly.

For instance, there is a plan to start heating most cycling paths in the city center, keeping them snow and ice free, so that cyclists can use them all year round, no matter the weather conditions, without risking an injury.

Also, authorities plan to introduce designated areas on roads near the city, where motorists will be encouraged to leave their cars and rent a bicycle to enter the city center.

Furthermore, the city will work on creating more convenient parking solutions for cyclists. By requiring a “Bicycle Effect Analysis” to be done before constructing a new building, businesses and homeowners will be mandated to make sure there is appropriate bicycle parking in the building, so there will definitely be more parking spaces for cyclists in the future.

With all this in mind, it’s safe to say that Groningen is a perfect example of a cycling-friendly city and a model that many other cities around the globe could easily follow as they tackle traffic congestion and try to find more sustainable urban mobility solutions. This Dutch city has shown that it’s not that difficult to make people leave their cars behind and get them to use alternative, more environmentally-friendly and more cost-effective transportation options. It’s one of the few cities in the world where bicycles are the primary mode of transport for the majority of its residents, which is something that quite a few cities could use.