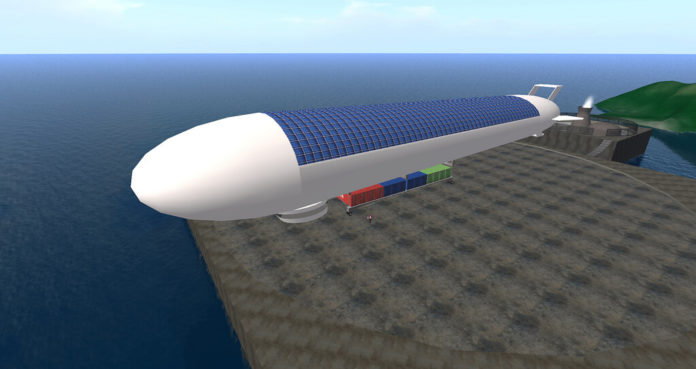 China has recently launched a gigantic airship into near space from Mongolia.

The helium-filled airship has been positioned near the top of the Earth’s atmosphere. It took no fuel to ascend that high into near space. The sun powers it into position after an initial helium bounce with solar panels along the top surface of the 250-foot long airship.

The  airship is a prototype to test an airship that will be able to stay aloft for up to 6 months, powered with solar panels integrated into its soft covering. The Yuanmeng was tested above Xilinhot, Inner Mongolia, according to People’s Daily Online, an official newspaper of the Chinese Communist Party.

Chinese engineers are seeing how to make it able to withstand the temperature extremes found at the edge of space, where it is boiling hot by day and freezing every night.

Airships, or dirigibles were the natural next development after balloon travel in the 19th century, but then faster airplanes were invented and replaced these slow-moving gentle giants.

These days, it is polluting fossil-fuel-dependent container ships that deliver goods from one continent to another. But they have high carbon emissions.

In tomorrow’s carbon-constrained world, could airships be how we move cargo?

There are many advantages to airships for modern needs, and China’s airship trial could presage a comeback for these purposes. An airship is an extremely fuel-efficient way to move things for essentially carbon-free delivery. It is also able to be much larger and carry much more weight than an airplane. The internal volume is a humungous 18,000 cubic meters (635,664 cubic feet) and it could carry fifty tons of cargo.

And for any purpose that doesn’t require speed, an airship makes an economical choice; for example to go to the edge of space, to carry a large payload, or to remain stationary there for months.

What makes the airship different from 19th century airships is the solar integrated into the exterior.

The way it works is a hybrid of the lighter-than-air helium, and solar electricity. Initially, helium floats it up to near space, and solar power is then used to drive propellers that steer it along the edge of the atmosphere into position.

This new use of solar to power an airship is not the first solar / flight combo. NASA has long used solar panels on interplanetary flights like the International Space Station as well as to power the little Mars voyager that has sent back gorgeous shots of our nearest neighboring planet in our solar system.

Solar power is also the best option for powering lightweight high-altitude drones because panels can be very lightweight and of course solar power needs no refueling.

China’s giant airship was loaded with communications gear—“data relays, high-definition observation and spatial imaging” equipment according to Popular Mechanics, as its slow-moving qualities make it the perfect surveillance of the ground or airspace. It can also act as a communication satellite or stand in for a central base station to command military aircraft.