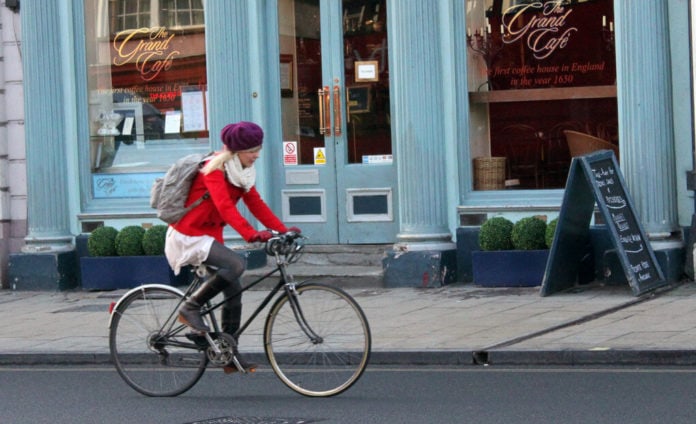 Biking has been a popular mode of transportation since the late 19th century. Oddly, however, the majority of Americans have never really embraced the bike as a suitable commuting method. Part of this is due to the sheer expansiveness of American cities. With many people living in suburbs and working downtown, biking just isn’t seen as a viable option. Another problem is how ill-suited American roads are for bike traffic. Bike lanes and paths are a rare find in many cities and most people aren’t willing to get on streets with aggressive, sleepy and distracted rush hour drivers.

Even with these obstacles, however, commuting to work by bicycle is still possible and shouldn’t be ruled out. Below are a few ideas you might consider before hopping into bumper to bumper traffic again.

Without a doubt, Google is one of a bicyclist’s best tools. Recently Google Maps has introduced a new feature that will actually map the best possible bike route from one destination to another. Using Google’s extensive knowledge about… well… everything, Google Maps can introduce bikers to new routes and bike lanes that they may otherwise have never known about.

To test out the feature, I tried to think of a city considered to be pretty reliant on car traffic. The first one that came to mind was Dallas, Texas. As anyone who has ever been to Dallas can attest, highways and 45mph streets are by far the dominant means of transport. Moreover, the city is one of the most expansive in the nation with suburbs located over forty miles from downtown. So I tried mapping out the route from Allen (30 miles north) to downtown Dallas and expected to find a pretty tough ride. To my surprise, even this supposedly bike-neutral city had a fair number of routes. Almost all of the suburban biking was on roads with established bike lanes. Getting into the city, there was actually a bike path that stretched more than ten miles. Only towards downtown did I find that a bicyclist would need to use the same lanes as car traffic.

Obviously, there’s a glaring problem with my Allen-Dallas route: no right-minded individual is going to bike thirty miles to work. So that leads me to my next point which is public transportation. Unfortunately, public transportation has a pretty bad reputation in some cities It often doesn’t have enough stops in enough places. Even if you could get into downtown on the train, your office might be more than a mile away. In a suit, tie or heels that sort of distance spells out disaster.

That’s where a bike could come in handy. Instead of walking fifteen blocks from the train stop to the office, you could just hop on a bike and coast there. Again I’ll turn to Dallas as an example. If you were trying to get into downtown from Allen, you could ride your bike to the nearest D.A.R.T light rail station in Plano (25 miles out), hop on the train with your bike, speed past the bumper to bumper traffic clogging the north-south highways and get into downtown half an hour later. Bike a little ways to the office after that and you’ve got yourself a pretty pleasant commute.

One of the major complaints about biking to work is the unavoidable sweat that riding entails. There are a few good ways, however, to mitigate the sweat problem. First and foremost, don’t wear your suit on your bike. Change into your work clothes in the work restroom. While it might not be the most pleasant sensation (everyone hates restroom floors, I know) spending sixty dollars on gas every week isn’t the most pleasant sensation either.

To carry your clothes, deodorant, briefcase, etc. you could invest in a bicycle basket. Any bike shop should have baskets available for the back and front of your bike. Or perhaps you could try leaving your work clothes at work and simply change when you arrive in the morning. In your basket you could also carry some body wipes or a wash cloth. If used as soon as you get to the office (before you change into your work clothes) having something to dry off with can make a big difference in how you feel and smell the rest of the day.

In conclusion, everyone should give bike commuting another chance. Biking burns calories, doesn’t burn gasoline and, without a doubt, is a more fulfilling way to start and end the work day than an SUV. While our cities and roads may not be designed for pedal pushers, with a little creativity bicyclists can find their place in the morning rush hour and live healthier, more eco-friendly lifestyles.