A hamburger a day could increase your risk of dying by a third.

Beef production uses one hundred times more water than vegetables do. A meat heavy diet is linked to obesity. It’s also expensive. The horrors of raising meat in confinement are well known. We all know the arguments in favour of being vegetarian. But, pause for a second to imagine your last hamburger. OUCH.

If vegetarianism is at fundamental odds with your tastebuds but not with your principles, then Weekday Vegetarianism is a winner. This is the ‘third way’ for those who reject the binary meat/no meat solution: it’s an easy to implement change that yields stunning results.

So how does Weekday Vegetarianism work?

It does what it says on the tin: Monday to Friday, steer clear of meat; at the weekend get stuck into the barby. Of course, during the weekend try to organic, locally sourced meats rather than the factory reared stuff clogging up the supermarket. Not only is this healthier and tastier, it’s better for the environment and the local economy too. If you want to take it to the next level with regard environmental consciousness, avoid the major culprits of industrial and health damage – red and processed meats. Swap them instead for some sustainably harvested fish.

The health results speak for themselves. Vegetarianism (even partial) is the ultimate weight loss diet. Vegetarians live on average ten years longer than meat eaters, who are at an increased risk of succumbing to cancer, heart disease and diabetes. The wartime generations — in which meat was strictly rationed, are said to be the healthiest generations ever, in large part due to their reduced meat intake. Because much mass produced meat is reared on grain — rather than its natural grass — animals are often pumped full of antibiotics, which in turn can make humans susceptible to harmful bacteria. The World Health Organization warns that certain flu viruses could mutate to be passed on in meat.

But the ‘green benefits’ are big too.

Eating meat causes almost 40% more greenhouse emissions than all of the world’s cars combined. That’s a big, meaty footprint. Switch to weekday vegetarianism and your carbon footprint will be cut in half. Mark Bittman, author of “How to Cook Everything Vegetarian”, writes in the New York Times: “if Americans were to reduce meat consumption by 20%, it would be as if we all switched from a standard sedan — a Camry, say — to the ultra efficient Prius.”

Add to that the fact that the guilt of chomping into a Bambi burger will all but be assuaged, and that your household shopping bill will all but half and… what’s not to like? 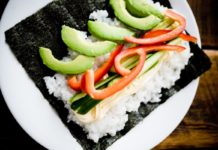 5 Ways Going Vegetarian Can Help Save The Planet

5 Ways Going Vegetarian Can Help Save The Planet