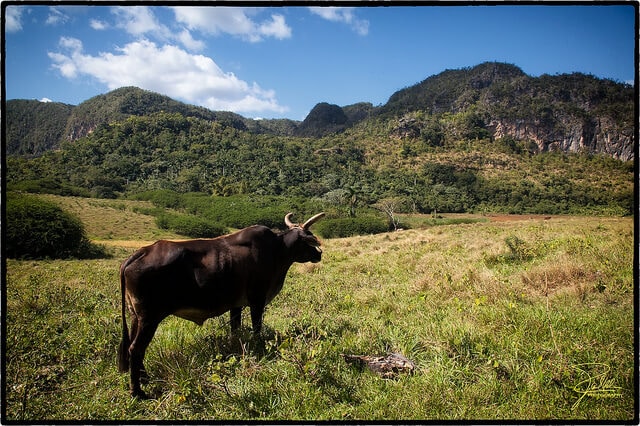 The two, hulking draft animals—each weighing more than a ton—have morphed into an improbable cause célèbre, owing to plans by Green Mountain College to slaughter them for meat this Halloween. (Lou has a bum back leg, so the team can no longer work Green Mountain’s student farm.) Animal advocates are urging the college to release the oxen to nearby VINE Animal Sanctuary, where they could live out their lives in peace, and tens of thousands of folks worldwide have signed on to the cause.

The college is holding firm. Green Mountain is well known for its environmental programs, and it frames this decision in terms of sustainability. Left alive the oxen would do nothing but consume resources. In death they will generate a ton of grass-fed cafeteria meat—and every pound from Bill and Lou means one less pound from factory farms, notorious contributors to climate change.

The moral of the story is clear: it can be dangerous to let sentimental visions of nature inhibit our response to climate change.

But if you think the animal activists are the ones peddling a dangerously sentimental vision of nature in this story, you should think again.

American environmentalists are enchanted by the image of small livestock concerns, which pasture animals over the life course rather than finishing them in stifling CAFOs (concentrated animal feeding operations). “Slow meat” harkens back to a simpler time, when America did not have 300+ million people to feed and farm life represented the height of frugality.

Well-managed, slow meat farms have undeniable benefits in terms of water management. However, the idea that they are broadly sustainable in an age of climate change is pure illusion.

Consider the problem of methane—the most potent of the greenhouse gases, emitted at comical but destructive rates by flatulent cattle. The feed that industrial animals receive actually causes less digestive methane than pasturing typically does. (CAFO animals also fatten quicker and lead shorter lives, with less time on the earth to pass wind.) Slow meat operations can cut methane emissions to approach what CAFOs do, but only if they provide the right forage mix.

As turns out, any potential climate benefits to slow meat production depend on a great number of ifs: if the right crops are grown, if the right crop rotations are made, if the right herd density is maintained, and so on. Overgrazing can destroy the soil’s carbon-storing potential; and even healthy pasture must be tended carefully over generations to avoid precipitous CO2 releases.

The Union of Concerned Scientists has developed a dense set of protocols that it believes would enable the slow meat sector to generate meaningful net reductions in national carbon emissions. But the UCS fails to consider why and how small producers would be willing to sign on, despite additional costs, when their profit margins are already slim. Would practices be monitored? And given that slow meat represents about 3% of the U.S. livestock market, how would the business grow to create the solid carbon savings for America the UCS foresees?

As the 3% figure makes clear, moreover, our intuitive belief in slow meat’s climate advantages turns on an optical trick. Because the farms are relatively small, and because there are so few of them, we don’t stop to consider what would happen if somehow did ramp up to meet American demand. The effects on land use alone would be grim, given the horizontal nature of pasturing. Overgrazing would increase. And, even still, without byzantine new regulations and enforcement, there is no reason to believe that slow meat would help to curb the agricultural sector’s toll on climate.

Of course the truth is that slow meat can’t and won’t ramp up to dominate livestock production. Structurally, the business relies on industrial concerns to secure a market in which it can, at best, sustain a profitable niche. And like any niche product, slow meat’s brand cache—and its ability to attract a higher price point—derives from its distinctiveness.

Slow meat’s greatest achievement is enabling a narrow tranche of consumers to feel better about their food, and only theirs.

Ultimately, that is to say, slow meat represents the kind of solution to agriculture’s role in climate change that separate but equal represented for America’s racial ills. It is blinkered and stingy, geared to preserving the comforts of a privileged class rather than embracing a shared and livable future. It relies on an eerie belief in the “natural order of things.” It hides the fundamental moral issues at stake. And it is, in the end, unsustainable.

The college could still turn this story around.

It could start by admitting that letting Bill and Lou live is hardly a climate concern. (All the animals of America’s sanctuaries could live out their lives without causing any appreciable environmental harm.) It could serve plant-based proteins on days the students would have eaten ox, because skipping meat and dairy is the easiest and cheapest way to reduce your individual carbon footprint.

The college could even spearhead powerful new dialogs concerning what a climate-friendly diet for America would look like and how agriculture might best support it, helping move this discussion from the margins to the center. Because a mainstream movement toward plant-based diets, powered by environmentalists and moving with the intensity of the anti-smoking campaigns, represents a far more efficient way to short-circuit the water depletion, destruction of carbon sinks, and greenhouse gas emissions caused by livestock production than does dreaming of pastoral, farm-dotted hills.

But if instead, at the end of this month, Bill and Lou are sacrificed to promote a sentimental vision—one that allows us to believe confronting climate change won’t entail extensive human change—the oxen won’t be the only ones to suffer.

You and I will too.