Greener IdealHelping you live sustainably
More
Home Food Who Deserves To Starve As The Planet Warms? 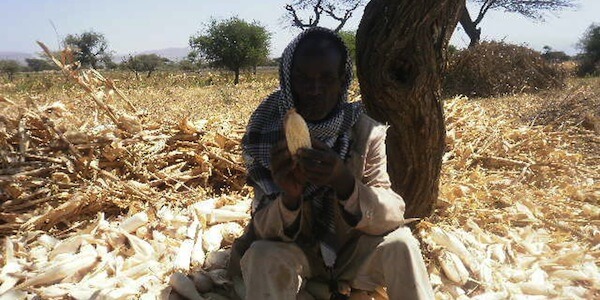 Experts have long warned against the devastating effect climate change might have on agriculture, and now there’s some hard numbers to back up their claims. In an interview with the Observer last week, Frank Rijsberman, an international expert on food insecurity, stated in no uncertain terms:

“Food production will have to rise 60% by 2050 just to keep pace with expected global population increase and changing demand. Climate change comes on top of that. The annual production gains we have come to expect … will be taken away by climate change. We are not so worried about the total amount of food produced so much as the vulnerability of the one billion people who are without food already and who will be hit hardest by climate change. They have no capacity to adapt.”

The US government is already predicting serious droughts and temperature changes that will affect practically all produce and livestock grown in the country. In a draft report of the US National Climate Assessment, researchers write:

“Critical thresholds are already being exceeded. Many regions will experience declines in crop and livestock production from increased stress due to weeds, diseases, insect pests and other climate change-induced stresses. Climate disruptions to agricultural production have increased in the recent past and are projected to increase further.”

The truly terrifying thing about this report is the fact that these are simply the predicted effects on a major industrialized nation. If these are the impacts that North Americans can expect from climate change, how much worse will the effects be on citizens of poorer nations in the coming decades?

The outlook isn’t good. A recent US-funded study of the Lower Mekong basin, which includes Vietnam, Cambodia, Thailand, and Loas predicts that temperatures in the area might rise twice as high as previously expected, potentially devastating food supplies for 100 million people. Another study predicts that basic food supplies in China may become insufficient for the country’s population as early as 2030.

Africa in particular is expected to bear the brunt of the coming food shortages. While some nations in west Africa can expect greater rainfall and better crop yields, large parts of the continent are becoming warmer and more arid already. Add the fact that most north African nations already import staple crops like wheat, and you have millions of people who are deeply vulnerable to decreased yields and higher prices in other countries.

South America won’t do well either – a temperature shift of only 2 degrees could significantly damage many staple crops in the region. Brazil in particular stands to lose much of its soy, rice, bean, and corn crops in the next 20 years. At least they’ll still be able to grow quinoa and potatoes.

North America and Europe won’t go unaffected by these changes, but let’s be clear – these continents will be significantly less vulnerable both due to more moderate temperatures and a position of greater economic privilege.

Institutions like Washington State University are working on developing heat-resistant varieties of wheat to export to India in coming years. But the fact is that there are hundreds of millions of people around the world depending on US researchers to help them survive rising temperatures and unpredictable weather… while at the exact same time, US lawmakers continually refuse to pass legislation that will actually have a measurable impact on climate change.

It’s difficult to imagine the same approach being taken if Americans were the people expected to starve in coming years. Surely if that were the case, the US government would be taking a proactive approach to preventing climate change, rather than relying on private research to make the best of a bad situation.

Weighing the evidence, it makes this American wonder: do my government and a majority of my country really believe that the oil industry‘s feelings are more important than whether the poorest people on the planet live or die? I don’t like to think quite so poorly of my country, but the available evidence is hard to ignore.